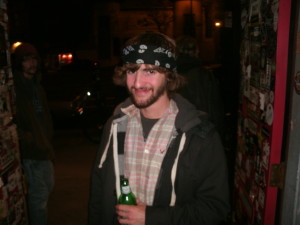 This tale takes place during a trip to the American West back in May of 2012 that I took with some friends; Corey and Wes, as well as my brother, Rob. We were working our way up the sunny state of California, having started in LA, and were stopping in one of my favorite cities on the planet: San Francisco.

We were road-tripping it on this journey, with a large Chevy van that was pulling a pop-up camper called The Duck. We had just made it up the California Coast Highway, stopping once at a secluded gas station to fill up, where the cost of filling our tank was about equal to the GBP of a small country.

We arrived in the evening, and were meeting a friend who lived in the city named Ross. He was going to show us around during the following day, but didn’t have anywhere for us to crash that night. We figured we’d sleep in the van, which spurred the idea of checking out the bar scene and getting a good snooze-buzz going for the night.

Ross was game, and invited his roommate Alex along. We parked a van near Fisherman’s Wharf and took a taxi uptown to meet them. The taxi ride was an experience all its own. I felt like I was in the movie Bullitt and this guy was some kind of Indian version of Steve McQueen; ramping his little taxi on the slanted streets and sliding it sideways around corners.

We met up with Ross and Alex and they took us to place called Knock Knock Bar, which we later found out was the second highest rated hole-in-the-wall bar in the city. The place was designed to look like the inside of a cave or something to that effect, and there was interesting art over all of the walls. The beer selection left me in a quandary, offering only brews of classier taste—a direct synonym of my beloved Budweiser or Busch. I have a true redneck’s taste in beer, but we’ll save that discussion for another time.

We had a couple of drinks there before the executive decision was made to move on, this time to a trashier establishment—the name of which escapes me. It did however, offer a foosball table, as well as a photo booth, both of which fulfilled our booze-addled thirst for entertainment.

It was here that things started to get, well, drunk. We had challenged a couple of other bar patrons in a foosball tournament, which gradually turned into a spectacle of extreme importance. Everyone was yelling, spilling beer and attracting a crowd of onlookers while we battled it out in the high-stakes game of table soccer. It turned out they were much better at the game than we were. We lost handily, which provoked further alcohol consumption. This did not stop us, however, from continuing to trash-talk and challenge them to re-matches.

Somewhere during this time, I decided it was time for “Hillbilly Tom” to come out and show himself, and I put in a large dip of chewing tobacco. Quickly realizing I had nowhere to spit, I opted for the already disgusting floor of the bar. There were stares of disgust, confusion, and some of humorous amusement; none of which, luckily, were from anyone actually working in the bar.

After another crushing blow to my ego in foosball, I went outside for a smoke and found Alex having a conversation with the door man, who was a larger fellow in his mid-to-late fifties. Alex spoke with what sounded like a Columbian accent:

“Hey mahn, is this cho bike?” He said, pointing to a black motorcycle parked along the curb.

“Naw man, I wouldn’t drive that piece of shit,” the door man replied.

“What about the owner of that bike?—choo think he knows where to buy some cocaine?” 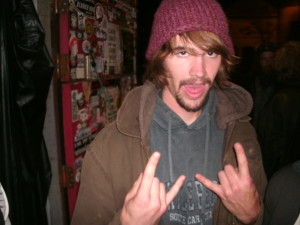 We left and walked further uptown to a pool bar. By this time it was almost two-thirty in the morning and the bar was getting ready to close. Wes, Corey, Rob, and Ross all went across the street to a pizza joint. I had to grab some money from the ATM outside and when I walked in the pool bar to grab a beer, Alex was already involved in a game of pool. He was playing against two other people and I was asked to join. Some money was thrown on the table and a wager was agreed upon.

I will stop here to mention that I suck at pool. Unless, I’m the perfect level of drunk. Then I’m somehow worthy of ESPN coverage. I line up my pool stick with flailing, sloppy arms and then suddenly form composure and tap the cue, and it normally goes in. I have no explanation for this, but it’s the truth.

Needless to say, not being drunk enough was no problem and I somehow managed to clear the table on my first turn with the exception of one or two balls. The opposition was not a big fan of this, especially taking into account their considerable lead before my entrance into the game. Their turn came and went, and then Alex sunk the last of our balls and won the game.

He snatched up the money, and the two guys started getting upset, accusing me of “pool-sharking” them. I laughed at the accusation—I was just as surprised as they were that I’d cleared the table. Alex on the other hand, did not find amusement with it, and stepped up in their faces yelling.

“Hey man, you don’ play the game if you can’ handle it, eh?! You sit the fuck down and leave my fran alone before I fack you up, bro!”

…I slid slowly outside and joined the others. After a few moments Alex walked outside, turning to yell into the bar at the defeated pool-opponents.

All of the bars were closed at that point, and everyone decided to call it a night. We were having trouble flagging down a taxi, so Alex offered his assistance:

“I got choo mane, hold on,” he said, walking into the middle of the street and waving his arms at an oncoming taxi until it screeched to a halt in front of him. “There joo go, ahh!”

We told Alex and Ross we would get a hold of them the next morning to check out the city and whatnot, then the four of us piled into the taxi. We told the driver where to drop us off, and started conversing with him. He had moved to the United States from Russia, waiting ten years for permission to leave his country.

We asked if he’d checked out anything else in the country, such as the Grand Canyon, or the Giant Sequoias, and he told us he hadn’t. He had basically stayed in the same city he’d arrived at for the past fifteen years. We implored him to take the time and check out what the west has to offer, and it seemed to actually make an impact on him. By the time he dropped us off at the Wharf, he told us he would definitely take a trip to see it.

We exited the taxi and started walking to the van.

“I’m not even drunk anymore,” Rob said. “Anybody think we should just say fuck it and drive to the Redwoods?”

“We do have some beers in the cooler still,” Corey offered.

That was enough to give the idea a go, and I jumped in the front the passenger seat while Rob hopped behind the wheel and the other two got in back. Beers were dispersed minus Rob, and the van fired up.

Rob piloted us towards the Golden Gate Bridge to exit the city while Corey, Wes, and I smashed some more beer. We got to the bridge to discover that San Francisco was going to live up to its reputation—the bridge was completely engulfed in fog. We could barely see a few feet in front of the van and Rob started yelling as he suddenly encountered traffic cones in the middle of the road! Apparently the bridge was under construction, which was made clear upon dodging the actual workers next.

We swerved and continued screaming as random silhouettes and sudden turns in the trail of traffic cones appeared through the fog. Who the hell does bridge construction in a geological location known for its fog, in the middle of the night?

We somehow made it over the bridge without committing vehicular manslaughter, and relaxed as we hit open road. Corey and Wes fell asleep in the back, and I continued to consume beers.

I continued to imbibe myself to excess until late into the night, discovering upon waking the next morning that I had sent text messages to an alarming number of people. This is not a usual occurrence for me—I’m not a “drunk-texter.”

I had also somehow managed to navigate Rob to a “camping spot” about three miles from the highway. I put the term camping spot in quotations, because I’m not sure of its legitimate claim to such a title. It was a pull-off on the side of a dirt road next to a lake. Early the next morning—which was actually about two hours later considering we had arrived at there around 5:30 a.m.—we discovered just how popular our free camping spot really was.

I woke up at first to what sounded like someone banging pots and pans together outside the camper. Then came a dirt bike speeding by next to us. The pots and pans sound continued.

“What the fuck, it sounds like someone is driving goddamned fence posts outside,” Wes said in an irritated tone as he rolled over in his sleeping bag. “What time is it?”

We walked outside. There was a group of people driving fence posts next to the lake.

Thoughts of sleep were abandoned, and we took down the camper. We had been back on the road north for about an hour when Wes received a text message from Ross, who had no idea of our departure after leaving him and Alex the previous night:

“Yo man I’ll probably just meet you guys at Fisherman’s Wharf and we can go from there. I’ve got some really sweet places for us to check out, what time you thinkin’?”