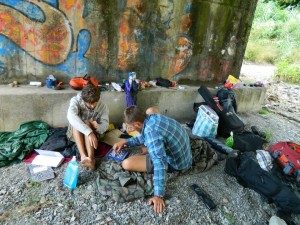 Editor’s Note: If you’re not familiar with the “Artists Abroad Story” you should read it before checking out this article.

I am writing you from the small town of Deiva Marina, Italy, where we have been (get ready for it) sleeping under a bridge with (now really brace yourself) an emu and four wild boars. We left Heidelberg a little over a week ago and to start hitchhiking towards Italy. The week as been an interesting one at the least, an absurd one at the most.

We were stranded at a gas station, where we were searched by cops for something called “May-vee-wanna,” and after their disappointment in our lack thereof of the mystery substance, they resorted to searching any other person near the gas station who looked interesting to them. One of the unlucky motorists turned out to be our savior from the 6-hour gas station stay, a man named Tomas who ran a rather large booking company. After the police’ s Gestapo-like search, we asked him for a ride and he accepted.

Now when I say “rather large booking company”, I mean it. Turns out the guy was the European booking agent for Akon, Snoop Dogg, 50-Cent (around 2005), Warren G, The Wu Tang Clan, Nicki Minage, and others. He let us read one of the aforementioned artist’s show requirements, and let me tell you–everything you hear about pop star divas is true. “One case of Fiji water, 12 bottles chilled, 12 bottles room temperature… Lunch: grilled chicken, fried chicken, three large pizzas, etc., etc….Dressing room requirements: One black couch, one black chair, one black coffee table with no glass top; 3 bottles of Cristal, etc…” I was dumbfounded. Tomas was nice enough to take us to a park where we were allowed to sleep.

Unfortunately, that park was a few miles away from where we needed to be to start hitchhiking the next day. So our afternoon began with an extensive hike down the autobahn towards a gas station we had seen from the highway. After arriving there, we collapsed into a pile of sweat and beards; taking a break before starting to ask people for rides. We just set a sign in front of us and sat there, and for some reason that is still a mystery to us, an pretty younger woman walked up and offered us a ride. There was one issue: She drove a Fiat Panda. And we have a lot of stuff.

We managed to fit everything, defying all laws of physics and possibly space and time, and she ended up driving us a good ways into our journey before dropping us off at a travel stop. And get this- bought us a pretty pricey dinner! We were eternally grateful for her kind gift, and Nyla, if you’re reading this -and a quick apology if I spelled your name wrong- THANK YOU!!!

The bad part was that by this time it was late in the evenings. You wanna know something people don’t like to do after dark? Pick up hitchhikers. After much deliberation, we decided to sleep in some bushes next to the gas station. Don’t worry, it gets much more absurd than that.

We woke up very early the next morning to avoid being clubbed to consciousness, then unconsciousness again, by police officers. We quickly found a ride, albeit only for a short distance. From that exit, we found another ride for a short distance, and from there we got a third ride from two nice girls who drove us through the Alps, to Bellinzona, Switzerland. We camped there next to a wonderful robin’s egg-blue river, and the next morning walked back into town.

We didn’t have to wait long before being picked up again, by a woman in another Fiat Panda – this time with a dog in the back! That was a very cramped ride, but we arrived right on the border of Italy after only a short ride. (Thankfully for the poor dog who had to ride in the back hatch!) From there we were advised to take a train further into Italy, since it was dirt cheap, and hitchhiking was reportedly hard in the specific region we were in.

So, train riding we did, making it from there to Milano, and then from there to Geneva. I wish it was as simple as that sounded. The long story, is that our first train had some type of malfunction and got stuck on the tracks for about a half-hour, which was just long enough for us to miss our next train. We had to wait a few hours for another, and didn’t end up arriving to Geneva until late at night. It was 12:30am when we found ourselves standing in the Geneva train station, trying to figure out what to do. The next train didn’t leave until 4:30am. So, the story escalates. We slept on benches that night, along with a bunch of homeless people. Okay, other homeless people. When I slept, I should say we napped. By the time we laid down, it was 2am, and we woke up 2 hours later to catch the 4:30 train. Unfortunately for us, this particular train didn’t run on Sundays! So again we waited, this time until 6am. We took this train south, where we planed to stop in Deiva Marina and find a place to sleep. Luck stroke again, and we missed the stop. We had to wait another two hours to take a train back to Deiva Marina, and upon arriving we quickly realized we had no place to stay. That’s where we found “The Bridge”.

Tonight will be our third night sleeping under The Bridge, which we share with a 5-foot tall emu (no, seriously a giant bird lives there, right with us) and four wild boars, who appear at night to annoy the ever-loving shit out of us. We didn’t plan on three nights here, but somehow we keep getting stuck. Yesterday, Corey and I woke up with some kind of virus and were laid-up with a fever all day, not doing much other than lying in our sleeping bags. Today, we got up and moving a little late, and went to a cafe to get on WiFi for the first time in a few days. We had planned to change our flight to Thailand to this Thursday, and were going to start heading to Rome this evening. Unfortunately, we discovered that we will no longer be able to change the flight, due to an extravagant cost in air-fare difference. So, here we sit; after being on our computers virtually all day researching jobs in Italy. It looks like we’ll be staying until the 30th of August. We’re not sure what the plans will be yet, but updates will come as they are available!

Once again a big thank-you to the people who have picked us up hitchhiking, and to Johannes and Isabel for putting a roof over our head for 5 days! All of you are amazing, inspirational people!